The Impostor Phenomenon: Am I a Fraud? 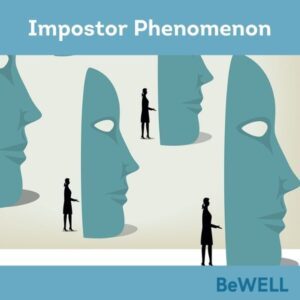 Have you ever found yourself in a state of constant doubt when it pertained to your professional abilities? Has it ever been extremely difficult for you to accept positive feedback from your peers or professional superiors due to a sure belief that either:

Were any of these beliefs followed by high levels of distress and feelings of anxiety or dread that someday this well-kept, yet shameful, secret would be out, and the world would know the truth: that you are an IMPOSTOR, you are not as competent as others perceive you to be, and it is highly questionable whether you are deserving of your accomplishments? If you answered yes to any of these questions, you may be like the estimated 70% of individuals research suggests are expected to experience, at some point in their lives, one or more episodes of the Impostor Phenomenon.

I remember when I first became familiar with the term. I always knew I wanted to work in the field of psychology, but it wasn’t until graduate school when I began to feel the gravity of being a therapist in training and the responsibility that came with working alongside clients to improve and better understand their mental health. At the time, my college was offering free on-campus therapy sessions to all students, and I leaped at the opportunity, signing up for sessions with a licensed therapist my first semester. After all, if I were going to become a therapist, I owed it to my future clients to understand what it would be like to be on the opposite end of the table and fully experience therapy from a client’s perspective. Although I don’t remember the therapist’s name, the experience I had was something that I will never forget. I recall sharing my doubts and concerns with her, making excuses and justifications for every academic achievement I’ve ever earned– I had glowing grades only because I studied vigorously and didn’t allow for any socialization time. “Anyone could get good grades if they tried”, I remember telling her. “I’m just really good at memorizing things, but I don’t really know things as well as my classmates” I would add. Then one day, she so eloquently described exactly what I was feeling. “You feel like a fake. You feel like everyone, but you, knows what they’re doing, and you’re wondering if you belong here. And that’s NORMAL.” I never felt so seen like I did that day. She worked with me to constantly challenge those beliefs I held so strongly that were never rooted in any facts, and I quickly learned that nearly everyone in the program were having similar experiences. I felt relief and was finally able to exhale.

What is the Impostor Phenomenon?

The impostor cycle begins when one is faced with an achievement related task. This triggers feelings of anxiety and self-doubt, which causes the person to either over prepare for the task or procrastinate. When the task is accomplished, the feeling of relief is short lived. If positive feedback is received, they become unable to attribute their success to internal qualities (i.e intelligence, skill set), and attribute the success to effort (if over prepared) or luck (if procrastinated.) This leads to feelings of fraudulence and heightened worry that their perceived flaws will soon be exposed.

Also known as Impostor “Syndrome”, the shift to address it as a phenomenon or an experience was made in an effort to increase normalization. This is done by avoiding pathologizing it through the use of medical-like terms, such as syndrome.

It is believed to disproportionately impact high achieving-high functioning individuals and was described in a 1978 study conducted by psychologists Pauline Rose Clance and Suzanne Ament Imes, where they observed a group of women over the course of their educational and professional careers. The sample size consisted of over 150 women, ranging from faculty at large universities holding Ph.D degrees, undergraduate and graduate students, medical students, and other professional women in fields such as counseling, nursing, law, anthropology, religious education, teaching, and occupational therapy. The sample size was described to be predominantly white middle to upper class women falling within the ages of 20-45.

The women in the study were not able to internalize their success leading to a sense of intellectual fraudulence, and eventually went on to experience symptoms of depression, anxiety, frustration due to their perceived inability to meet expectations, and an overall sense of low confidence and self-esteem regardless of their accolades and professional recognition in their field.

What Contributes to Feelings of “Impostorism” and Who Is Susceptible?

The question remains: what contributes to these skewed self-perceptions despite evidence that proves contrary? Dr. Pauline Rose Clance and Dr. Suzanne Ament Imes linked, in part, certain early family dynamics and societal sex-role stereotyping to the development of the Impostor Phenomenon. Individuals who grew up in an environment where achievement was highly emphasized by family members were seen as more likely to develop feelings of doubt and a desire to overcompensate for shortcomings, therefore impacting their achievement values and ability to later deal with failures vs. successes. Additional researchers have contributed certain personality traits, perfectionism and neuroticism being the main two, to the development of “impostorism.”  They’ve also added that stereotypes historically placed on women’s intellectual capabilities, in comparison to men, would only intensify the negative perceptions that have developed within the context of the family dynamics.

Reframe Your Thinking: Finding yourself in a new environment, or dealing with a new task, can be very stress inducing and even frightening due to the possibility of failure and exposure. However, it can be helpful to reframe the way that you are thinking and your perspective on the situation. Instead of viewing these moments as ways to prove your worth to others and obtain validation, try looking at is as an opportunity to learn. With a growth mindset, you can focus on improving yourself rather than proving yourself. Whether it’s school or work, you’ve already established yourself as a competent individual by landing that initial placement. New experiences can be difficult, but understand that no one expects you to know everything there is to know about everything on your first day. Try approaching things from a lens of curiosity and non-judgement.

Distinguish Facts from Feelings: Our mind has a way of tricking us into believing that what we are feeling is an accurate reflection of reality. While feelings are 100% valid, they are not always factual, and it’s important to remember that believing something to be true doesn’t actually make it true. Address these cognitive distortions by:

Example: “I just started at a new position, and I worry that my employer is probably

going to fire me once they find out that I’m the only one who doesn’t know what they’re doing.”

Example: “What facts do I have that proves my employer thinks I am incompetent? Have I been fired before? If so, do I have direct evidence that I was fired because of poor job performance? What evidence do I have that my lack of knowledge will lead to being fired this time?”

Example: “There may be a learning curve, and I won’t know everything there is to know right away. My employer has reviewed my experience before hiring me and already has a general understanding and realistic expectations of what I can offer, and will be more inclined to work with me than fire me.”

Take Notes of the Positives: Although we generally tend to experience more positive than negative, it only takes one negative interaction to feel as though your day has been ruined. Keeping a journal to write down 3-5 positive things that happened to you each day, no matter how small, can help reorient your mind so that positive thoughts become less fleeting. Avoid generalizing your days into “bad days” due to singular, isolated events. Whenever you need a reminder of just how positive a day actually was, flip through your journal.

Avoid Comparing: It’s important to understand that everyone isn’t perfect, and those who appear perfect may likely just be doing a very good job at showing the parts of themselves that are more accepted and likeable. If you judge yourself based off what’s on the surface of others, you end up comparing your worst to their best, and it’ll feel impossible to ever measure up. Turn that comparison into inspiration and use yourself as your own point of reference.

Remember: “We don’t grow green grass by focusing on our neighbor’s garden, we do it nurturing our own.”

Find a Balance: There is a time and place to feel challenged, and then there is space to shine and emphasize your strengths. It can be helpful to balance your day by engaging in activities that you feel confident in and are affirming. Whether it is volunteering to take on tasks at work that you know you can do well or picking up a hobby that fulfills you, balance is key.

Talk with Others in Your Field: Chances are that others in your field are struggling with similar feelings, but you are unaware of it because the impostor mentality can trigger feelings of shame and it tends to not be brought up in conversations. It can be very reassuring to learn that the people whom you deem trustworthy and skilled also struggle with feelings of incompetency, doubt, and worry. YOU ARE NOT ALONE.

See a Therapist: Therapy can be that space where you can feel free to express your thoughts and concerns without fear of judgement or criticism. A trained therapist can work with you not only to implement the above coping techniques, but they can work with you on connecting past experiences to present ones and help you recognize any underlying causes to these impostoristic beliefs. Rather than becoming paralyzed and staying stuck in the mentality of “I can’t”, your therapist can provide that needed support for action to be taken in hopes of moving forward.

Future studies have aimed to shift the conversation from solely “fixing” impostor beliefs in people, to focusing on the systems in place that have been fostering inclinations of self-doubt. While the original 1978 study on Impostor Phenomenon served as a powerful catalyst for future research to be conducted in the area, some of its noted limitations and criticism received was due to the lack of multicultural applicability and inclusivity of race, gender, profession, and social economic status, which speaks to its time. It is understood that individuals who may be starting new chapters in their lives are likely to have feelings of doubt, and we are learning that other populations are becoming more susceptible to impostoristic beliefs and reactions, including racial and ethnic minorities and members of the LGBTQIA+ community.

Living in a competitive environment can contribute to constant comparisons and an immense pressure to succeed. However, living in a society where minority groups may be made to endure systemic racism, discrimination, marginalization, backhanded microaggressions, and are implicitly and explicitly made to believe that they are less than, does much more than trigger feeling pressured. Having a sense of belonging is crucial in nurturing confidence and self-esteem. It’s imperative to equally feel seen, feel heard, and be validated within our communities and places of employment. We can work with individuals to better cope with impostoristic beliefs, while also, at an institutional level, openly welcome diversity and continue recognizing ways that we may be contributing to the festering and manifestation of this impostor phenomenon.

Abramson, Ashley. “How to Overcome Impostor Phenomenon.” Monitor on Psychology,

of the relationship between perceived discrimination and mental health among

Small Talks – Imposter Syndrome
Menu
Be.WELL. Newsletter
Subscribe to our newsletter to receive the latest updates and news.
We respect your privacy. Your information is safe and will never be shared.